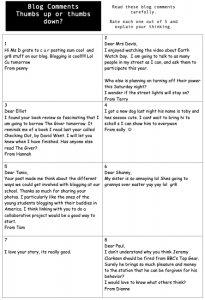 in class, we are learning how to comment properly.

we were also asked to rank comments from best to worst.

i think that number one was the worst because it had hi instead of dear and it did not have any capitals in the right spot and the spelling was incorrect. Also it used numbers to shorten words.

i think number six is the next worst one because it is of subject and is very random.

the next one is number seven because it is just one sentence and it dose not say who it is from and who it is going to.

the next one is number four because it dose not say who it is to and lots of the spelling is wrong so it clearly was not double checked.

number eight is next but it is good it is just off topic.

number five is next and i think it is good it just dose not have any questions.

next is five and two and i think they are both really good and use good punctuation.